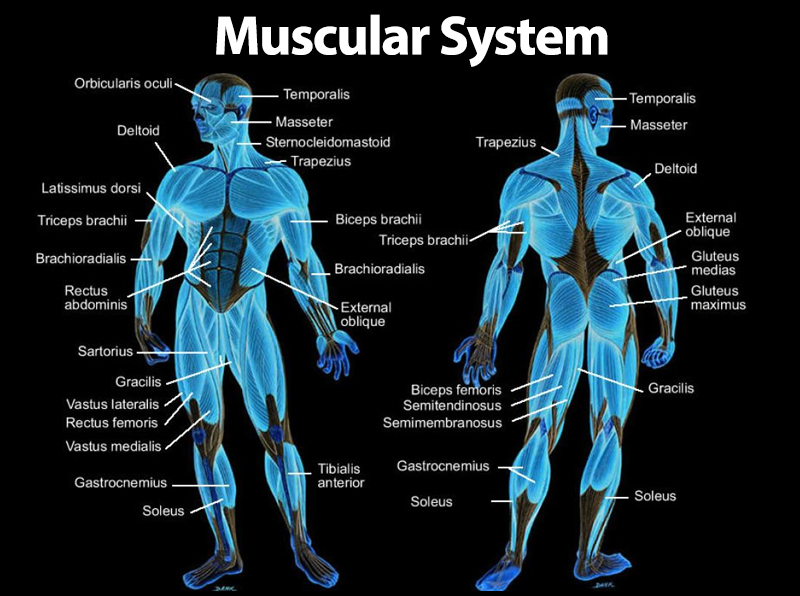 System: the relationship of the joints, tendons and fascia relating to movement and response to  external forces

Proprioception (/ˌproʊpri.ɵˈsɛpʃən/ PRO-pree-o-SEP-shən), from Latin proprius, meaning "one's own", "individual" and perception, is the sense of the relative position of neighbouring parts of the body and strength of effort being employed in movement.[1] It is provided by proprioceptors in skeletal striated muscles and in joints. It is distinguished from exteroception, by which one perceives the outside world, and interoception, by which one perceives pain, hunger, etc., and the movement of internal organs. The brain integrates information from proprioception and from the vestibular system into its overall sense of body position, movement, and acceleration. The word kinesthesia or kinæsthesia (kinesthetic sense) has been used inconsistently to refer either to proprioception alone or to the brain's integration of proprioceptive and vestibular inputs.

Myofascial release is a soft tissue therapy for the treatment of skeletal muscle immobility and pain. This alternative medicine therapy aims to relax contracted muscles, improve blood and lymphatic circulation, and stimulate the stretch reflex in muscles.[1]

Fascia is a thin, tough, elastic type of connective tissue that wraps most structures within the human body, including muscle. Fascia supports and protects these structures. Osteopathic theory proposes that this soft tissue can become restricted due to psychogenic disease, overuse, trauma, infectious agents, or inactivity, often resulting in pain, muscle tension, and corresponding diminished blood flow. Although fascia and its corresponding muscle are the main targets of myofascial release, other tissue may be addressed as well, including other arthrokinematic

pertaining to the movement of bone surfaces within a joint, the relation between joint mobility and tendons/fascia.

A fascia (/ˈfæʃə/, /ˈfæʃiə/; plural fasciae /ˈfæʃɨ.i/; adjective or fascial; from Latin: "band") is a layer of fibrous tissue.[1] A fascia is a structure of connective tissue that surrounds muscles, groups of muscles, blood vessels, and nerves, binding some structures together, while permitting others to slide smoothly over each other.[2] Various kinds of fascia may be distinguished. They are classified according to their distinct layers, their functions and their anatomical location: superficial fascia, deep (or muscle) fascia, and visceral (or parietal) fascia.

Like ligaments, aponeuroses, and tendons, fasciae are dense regular connective tissues, containing closely packed bundles of collagen fibers oriented in a wavy pattern parallel to the direction of pull. Fasciae are consequently flexible structures able to resist great unidirectional tension forces until the wavy pattern of fibers has been straightened out by the pulling force. These collagen fibers are produced by the fibroblasts located within the fascia.[2]

Fasciae are similar to ligaments and tendons as they are all made of collagen except that ligaments join one bone to another bone, tendons join muscle to bone and fasciae surround muscles or other structures.

Adhesions are fibrous bands[1] that form between tissues and organs, often as a result of injury during surgery. They may be thought of as internal scar tissue that connects tissues not normally connected.

Muscle fatigue, or physical fatigue, is the decline in ability of a muscle to generate force. It can be a result of vigorous exercise but abnormal fatigue may be caused by barriers to or interference with the different stages of muscle contraction. There are two main causes of muscle fatigue. The limitations of a nerve’s ability to generate a sustained signal (neural fatigue) and the reduced ability of the muscle fiber to contract (metabolic fatigue).